SB 6 - Update from the Capitol

Another busy week at the state capitol last week, as we started hearing House bills in committee for the first time. We are also still voting on Senate bills on the floor so we can send them over to the House for consideration.

I’m working hard every day to protect our values and priorities at the state capitol – please consider a donation today to help us prepare for 2018!

Some good news: my bill on surprise medical billing, SB 1321, passed the Senate unanimously on Thursday, by a vote of 28-0! It is now headed over to the House for consideration, where I will work with members from both sides of the aisle to make sure this important piece of legislation goes to the governor’s desk.

My resolution recognizing March 3rd as National Speech and Debate Day in Arizona, SCR 1018, was also approved unanimously by the senate on Thursday. I was honored to have speech and debate students from across Arizona join us for the reading of the resolution, which was exciting to say the least!

There is one notable bill that we killed in the Senate last week: SB 1243, which was another attempt to allow guns in public buildings in Arizona. This bill gets introduced every year, and this time we killed it by a vote of 14-16. Three of our Republican colleagues voted with us on this, and while we were unable to defeat several other gun bills, this one received its fair share of media attention, as it does every year it is introduced.

Some more good news from the capitol: many of you surely heard about SB 1142, otherwise known as the riot and protesting bill. While it passed the Senate, the speaker of the House of Representatives decided it would NOT get a hearing, and the governor also expressed his concern. This is great news, and clearly the result of all the public pressure and attention the bill received. Keep up the phone calls and emails to legislators – your hard work is getting noticed!

In addition to my work at the capitol, I also attended several meetings and events in our district. I was excited to attend the Ahwatukee Village Planning Committee’s meeting on Monday, and the Mesa Public Schools school board meeting on Tuesday. On Thursday, I spent time with business leaders in the tech community at a mixer with the Arizona Technology Council, and on Friday, I attended the launch of ASU’s School of Civic and Economic Thought and Leadership at the ASU Downtown campus. I ended the work week by attending the Tempe Chamber of Commerce’s State of the District event where I heard from our Congresswoman, Kyrsten Sinema. Quite the busy week!

And to top it off, I participated in the Chandler Ostrich Festival parade on Saturday in downtown Chandler. I had a great time, and enjoyed catching up with members of the Chandler City Council and other community leaders.

Looking ahead to this week, we will continue hearing House bills, with the last batch of Senate bills coming up for a final vote. Many of the more controversial bills that you may have heard about, like expanding vouchers or eliminating desegregation dollars, may make an appearance, but it still looks like they do not have the votes to pass the chamber. Stay tuned, and please continue to contact your legislators to let your voice be heard!

One of the questions I hear often is how the state budget is progressing. As many of you know, we cannot adjourn as a legislature until the budget is voted on, approved, and signed by the governor.

Everything I’m hearing indicates that it is going to take longer than usual to get this budget passed – while most years adjournment happens around early April, this year it may stretch into May or even June!

The reason for this potential delay? There appears to be significant disagreement in the Republican caucus on the governor’s budget proposal. While the governor included several new programs and initiatives in his proposal, many Republicans aren’t happy about where the funds to pay for those programs would come from. The governor would sweep almost $100 million from the Highway User Revenue Fund (HURF), which pays for things like road repairs and construction. Many rural districts, represented by Republicans, badly need these funds.

The governor’s proposal would also hurt cities, thanks to the bonding proposal proposed for the state universities. ASU, U of A and NAU would be able to collect the sales taxes on their campuses to pay for infrastructure projects – the problem here is that cities currently receive a portion of those tax revenues, and under the governor’s proposal, they would lose those dollars.

I’m keeping an open mind on this year’s budget, and hope we can work together to produce a bipartisan budget that invests in education and workforce development. I’ve met with the governor’s office several times, and told them each time that I would like to see additional investment in higher education, along with relief for the developmentally disabled community, who were impacted by the passage of Proposition 206 last year. If those two areas are taken care of, I could see myself voting for Governor Ducey’s budget.

Stay tuned – all things budget should be picking up very soon!

Capitol Snapshot – Taking you behind the scenes of what I’m working on! Here are some of the photos that we took at the capitol last week:

We receive visitors from the district every week, and last week we welcomed several constituents from Fuller Elementary School in Tempe. I recognized them from the gallery during floor session, and they received a tour of the Senate, including a stop at my desk on the floor! 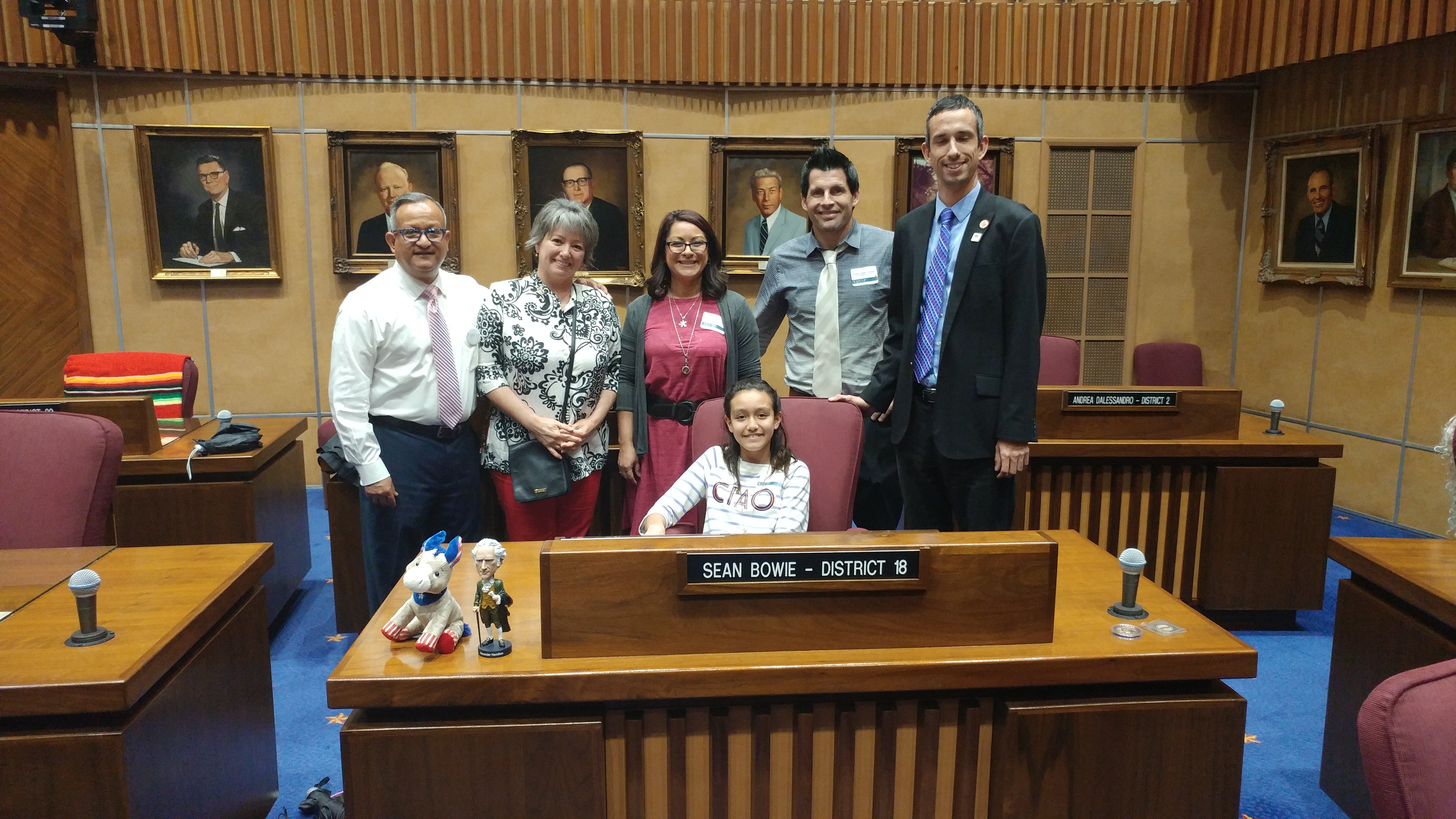 As I mentioned above, my bill on surprise medical billing, SB 1321, passed the Senate unanimously on Thursday. I took a picture of the big board as the vote concluded while my colleagues gave me a round of applause. A special day!

Finally, a look at my ride for the Chandler Ostrich Festival parade from Saturday. And no, I didn’t get a chance to take the Corvette for a spin – maybe next time!

As always, you can follow me on Facebook and on Twitter for more up to the minute updates. I appreciate all of your help and support – if you can, please consider showing your support today so I can keep fighting for our values and priorities at the state capitol. It is an honor to represent you in the state senate!

Yours in the fight,